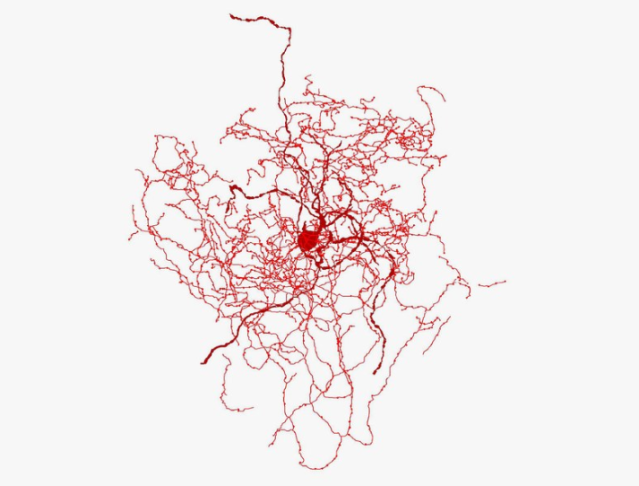 Tamas Lab/University of Szeged
It’s been more than a century since Spanish neuroanatomist Santiago Ramón y Cajal won the Nobel Prize for illustrating the way neurons allow you to walk, talk, think, and be. In the intervening hundred years, modern neuroscience hasn’t progressed that much in how it distinguishes one kind of neuron from another. Sure, the microscopes are better, but brain cells are still primarily defined by two labor-intensive characteristics: how they look and how they fire.
Which is why neuroscientists around the world are rushing to adopt new, more nuanced ways to characterize neurons. Sequencing technologies, for one, can reveal how cells with the same exact DNA turn their genes on or off in unique ways—and these methods are beginning to reveal that the brain is a more diverse forest of bristling nodes and branching energies than even Ramón y Cajal could have imagined.
On Monday, an international team of researchers introduced the world to a new kind of neuron, which, at this point, is believed to exist only in the human brain. The long nerve fibers known as axons of these densely bundled cells bulge in a way that reminded their discoverers of a rose without its petals—so much that they named them “rose hip cells.” Described in the latest issue of Nature Neuroscience, these new neurons might use their specialized shape to control the flow of information from one region of the brain to another.
“They can really act as a sort of brake on the system,” says Ed Lein, an investigator at the Allen Institute for Brain Science—home to several ambitious brain mapping projects—and one of the lead authors on the study. Neurons come in two basic flavors: Excitatory cells send information to the cells next to them, while inhibitory cells slow down or stop excitatory cells from firing. Rose hip cells belong to this latter type, and based on their physiology, seem to be a particularly potent current-curber.
A microscopy image showing a rosehip neuron (top) connected to a pyramidal cell (bottom).
Tamas Lab/University of Szeged
The discovery was a team effort. Lein’s group at the Allen harvested frozen tissue from two donated human brains and isolated individual neuronal nuclei onto a plate—one per well. Then they sequenced the RNA inside each one. If DNA is like the blueprint for a car, RNA is like the parts list. Using clustering algorithms, the researchers identified several unique gene expression patterns and matched them to 16 different cell types: 11 inhibitory neurons, one excitatory neuron, and four non-neural cells.
While they were coaxing nuclei into 96-well plates, their partners in the Gábor Tamás lab at the University of Szeged in Hungary were analyzing live tissue samples from patients who had undergone brain surgery. By using traditional techniques like filling the cells with a special dye and then recording how they reacted to different electric stimuli, Tamás’s group spotted a group of hippy, well-connected neurons—whose molecular markers matched up almost perfectly with one of Lein’s cell types. When they went looking to see if a similar molecular profile existed for any cells in the mouse brain, they came up empty-handed.
“It’s too early to say that this is a completely unique cell type because we haven’t looked in other species yet,” adds Lein. “But it really highlights the fact that we need to be careful about assuming that the human brain is just a scaled-up version of a mouse.”
Because live human brain tissue is so difficult to get, the vast majority of work characterizing the electrophysiology and connectivity of neurons happens in mice. A transcriptomics approach, though, can be applied to frozen tissue. There’s plenty of that just sitting in biobanks all over the world.