Skip to content
Posted on September 28, 2018September 28, 2018 by ralphpitre Posted in Article, Truth
It’s been almost a year of this Sidewalk Toronto adventure. October 17th will mark a true year. And in this year, the depth of our civic confusion has been exposed, exploited, and extended.
Let’s name the fundamental problem about this deal and this project. It’s not privacy. And it’s not that this is Google. The fact that this is Google matters, but that seems to distract everyone so let’s set it aside for today (an overdue update on that front shortly though).
Today, I will write on one thing only. Our city and our governance. Control and democracy. Economic development and service delivery. Delete Google. Delete privacy. And think, for a moment, about our city and the people that live here. 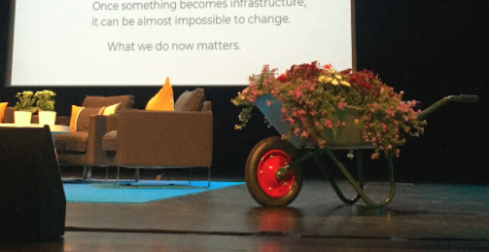 From the MyData 2018 Conference — Mad Ball’s slides
This deal would be a bad idea with any company.
There is a compelling and important argument being made about data and intellectual property. But it’s still not the main argument. I don’t want Canadian smart city companies defining and framing our data and tech governance either. What I want is for our city to create its policy and guidance for everything about data and technology independent of any economic development narrative because that’s how it’s supposed to happen. Smart cities mix two things into one and in the process create mass confusion, co-opting usually responsible civic institutions along the way.
The mess of this deal is the competing narratives. There are two. The first narrative, the one that all levels of government have fallen victim to, is the economic development narrative. This should not be narrative number one.
Narrative and issue number one should be if and how we want to build data and technology into our city operations. I challenge you to find any politician at any level of government that can explain that part of this deal. This is not a part of the story to leave until the end. This is not a part of the story to allow a corporate partner to define and frame. This is not the part of the story to rush. Any corporate actor will situate themselves as an indispensable part of government operations and a vendor to have to pay for ever more. It’s a story as old as technology in government.
Sidewalk Labs continues to fund and hold public discussions on any plausible urban topic and people continue to act as though it’s normal to have a corporation convening these talks. A corporation that is out and out ignoring any responsibility to convene accessible and entry level public discourse around data and technology. Which the government isn’t doing either. Which is completely shameful. Far worse than a company sticking to its marketing plan.
The primary problem of this deal will never go away. It is festering. And a range of civic institutions and organizations are enabling it. And the most culpable of all is the government. Can a corporate entity run over the rights of the people to set an agenda for our urban spaces? Evidently yes, yes it can — and kudos to Sidewalks Labs for seeing and feeding the economic development frenzy with a perfect and confusing partner — a public corporation with an economic development mandate. Well played.
As for the three levels of government that continue to allow this confusion of roles? The ones that were party to this RFP since day one? They still have time to pull the plug. They want to do this kind of deal? Shut it down and start again in a year or two once we’ve figured out what we want in our city in regards to our data and digital infrastructure.
Cities are where we live first. They are economic development zones second. Not both at the same time. This part of the problem isn’t about Google or the Canadian tech scene. This is an order of operations problem. Love Google all you want. And let them do this somewhere else first while we sort ourselves out. The city will be here, the land will be here, and the legitimacy of the government might be back too.